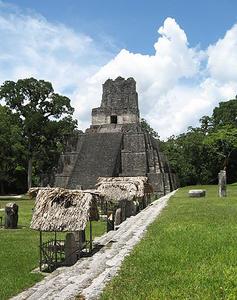 A new study reports that the disintegration of the Maya Civilization may have been related to relatively modest reductions in rainfall.

The study was led by Professors Martín Medina-Elizalde of the Yucatan Center for Scientific Research in Mexico and Eelco Rohling of the University of Southampton in the UK. Professor Rohling says “Our results show rather modest rainfall reductions between times when the Classic Maya Civilization flourished and its collapse - between AD 800–950. These reductions amount to only 25 to 40% in annual rainfall. But they were large enough for evaporation to become dominant over rainfall, and open water availability was rapidly reduced. The data suggest that the main cause was a decrease in summer storm activity.”

The study combines records of past climate changes from stalagmites and shallow lakes to model 40% reductions in summer rainfall and reduced tropical storm activity over the region. The work is published in the leading scientific journal Science.

Professor Medina-Elizalde, who led the study while at the National Oceanography Centre in Southampton working with Professor Eelco Rohling, says “For more than a century, researchers have related the demise of the Classic Maya civilization to climate change, and especially to drought. No sound estimates had been made about the severity of this drought, but some have suggested extreme scenarios. New data made it possible to finally get detailed estimates. To do this, we developed a model that coherently explains changes in critical datasets of change in the region’s balance between evaporation and rainfall.”

Professor Rohling explains why such modest rainfall reductions would cause the disintegration of a well-established civilisation, “Summer was the main season for cultivation and replenishment of Mayan freshwater storage systems and there are no rivers in the Yucatan lowlands. Societal disruptions and abandonment of cities are likely consequences of critical water shortages, especially because there seems to have been a rapid repetition of multi-year droughts.”

The scientists also note that the reconstructed droughts during the demise of the Classic Maya Civilization were of similar severity as those projected by the IPCC for the near future in the same region. Professor Medina-Elizalde adds, “There are differences too, but the warning is clear. What seems like a minor reduction in water availability may lead to important, long-lasting problems. This problem is not unique to the Yucatan Peninsula, but applies to all regions in similar settings where evaporation is high. Today, we have the benefit of awareness, and we should act accordingly.”

This research was funded by the UK’s Natural Environment Research Council.