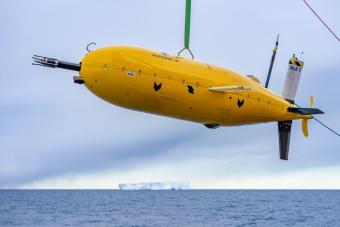 From January to February 2018, the AUV was deployed in the southern Weddell Sea during RV Polarstern cruise PS111 as part of the Filchner Ice Shelf System (FISS) Project – a collaboration involving leading UK research institutions including the NOC, British Antarctic Survey (BAS), Met Office Hadley Centre, University College London, University of Exeter and Oxford University, and international partners including Alfred Wegener Institute (AWI), and University of Bergen (UiB). The AUV plays a critical role in the project that aims to investigate and describe the current state of the complex atmosphere-ice-ocean system.

‘Boaty’ spent a total of 51 hours under the Antarctic ice, travelling 108km over the duration of the deployment. The vehicle reached water depths of 944m, and spent 20 hours exploring beneath a section of the ice shelf that was 550m thick.

Steve McPhail, Head of AUV Development at the NOC, said, “I am delighted in the success of this mission. For the engineers involved, this was a very challenging deployment that was not without risk. We knew that the environment was harsh, with −20 Celsius air temperatures and sea temperatures very close to the freezing point of seawater. Under the ice shelves there are significant tidal currents and the high southerly latitudes pose difficulties for the AUV’s underwater navigation. Once in the ice shelf cavity we had neither detailed information on the thickness of the ice, nor the depth of the water. We had no communication with the AUV for 90% of its time in the water.

“Waiting for the AUV to return after a 48-hour mission into a largely unknown environment is, to say the least, exciting, and as a result I was very relieved each time the AUV turned up, on time, and in the right place, circling 900m below the ship. Even then our problems were not over. With the surface of the sea frozen, we needed RV Polarstern’s help to create an ice hole through which we carefully navigated the AUV.”

The AUV carried two sets of CTD (Conductivity, Temperature and Depth) sensors measuring the salinity and temperature of the water. It was also equipped with a micro-structure probe to measure ocean turbulence, a sensor to measure the amount of phytoplankton in the water (by measuring the fluorescence of their chlorophyll) and a sensor to detect the turbidity of the water. Acoustic instruments (ADCPs) also measured the water current up to 80 metres above and below the AUV’s position, and accurately measured the depth of the seabed, and the draft of the ice along the vehicle’s track. 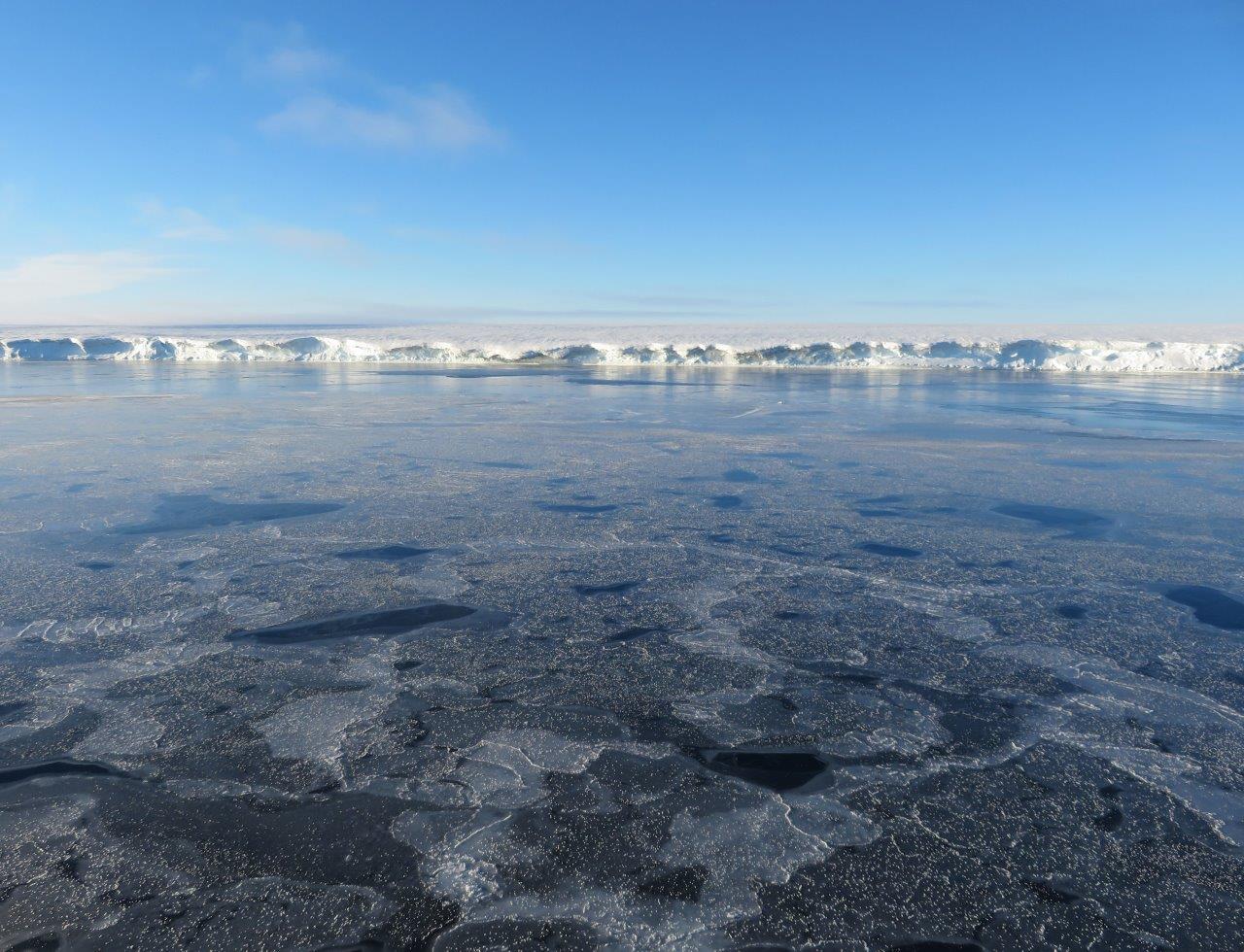 The Filchner-Ronne Ice Shelf is the second largest of its kind in the world. Covering an area of around 450,000 square km, it holds a greater volume of ice than any other floating glacier tongue. Climate researchers are particularly interested in whether more glacial ice is currently being transported into the ocean, since this process is related to rising sea levels. In addition, so-called ‘deep water’ forms near the ice shelf, which is a key driver of global ocean circulation and therefore impacts upon the climate system everywhere on the planet.

The PS111 research team involved many different disciplines including oceanography, meteorology, sea-ice physics, bathymetry, geology, and marine biology. Each share an interest in obtaining data from a region that, due to its permanent ice cover, can only be accessed using icebreakers such as the RV Polarstern and AUVs capable of travelling under the ice.

This latest successful mission builds on what ‘Boaty’ achieved in 2017 when it returned from its first Antarctic adventure with a unique dataset from the Orkney Passage, a region of the Southern Ocean which is around 4,000m deep. This latest mission successfully proves the under-ice capability of the vehicle, making it the first long-range AUV to have successfully explored this challenging environment.

Prof Adrian Jenkins from British Antarctic Survey is leading the investigation, said, “Understanding the contribution that polar ice sheets make to global sea-level rise is recognised internationally as urgent. The data from this mission are critical for assessing the future stability of Antarctica’s Filchner Ice Shelf. The ALR has enabled us to take a small step towards our goal of producing credible sea-level projections for the next 50 years.”

Dr Michael Schröder from the Alfred Wegener Institute - Helmholtz Centre for Polar and Marine Research is chief scientist on PS111, commented, “The ALR’s mission underneath the Filchner Ice Shelf fills the gap between our hydrographic section in front of the ice shelf and the three sub-ice shelf moorings deployed 60 km south of the front in austral summer 2016/17 as part of the FISS project. With these data we hope to shed light on the processes controlling the exchange of water masses across the ice shelf front, which might change significantly in the near future.”

Science Minister Sam Gyimah added, “Global warming is one of the greatest challenges we face today. Boaty’s maiden under-ice voyage provides scientists with a greater understanding of the changes that are occurring in Antarctica, which could have a colossal impact on our planet – but, this is only the tip of the iceberg. The government is committed to doing more and, through its ambitious Industrial Strategy, we are revolutionising industries and society by shifting to clean growth economies – ensuring the UK is leading the way in tackling climate change.” 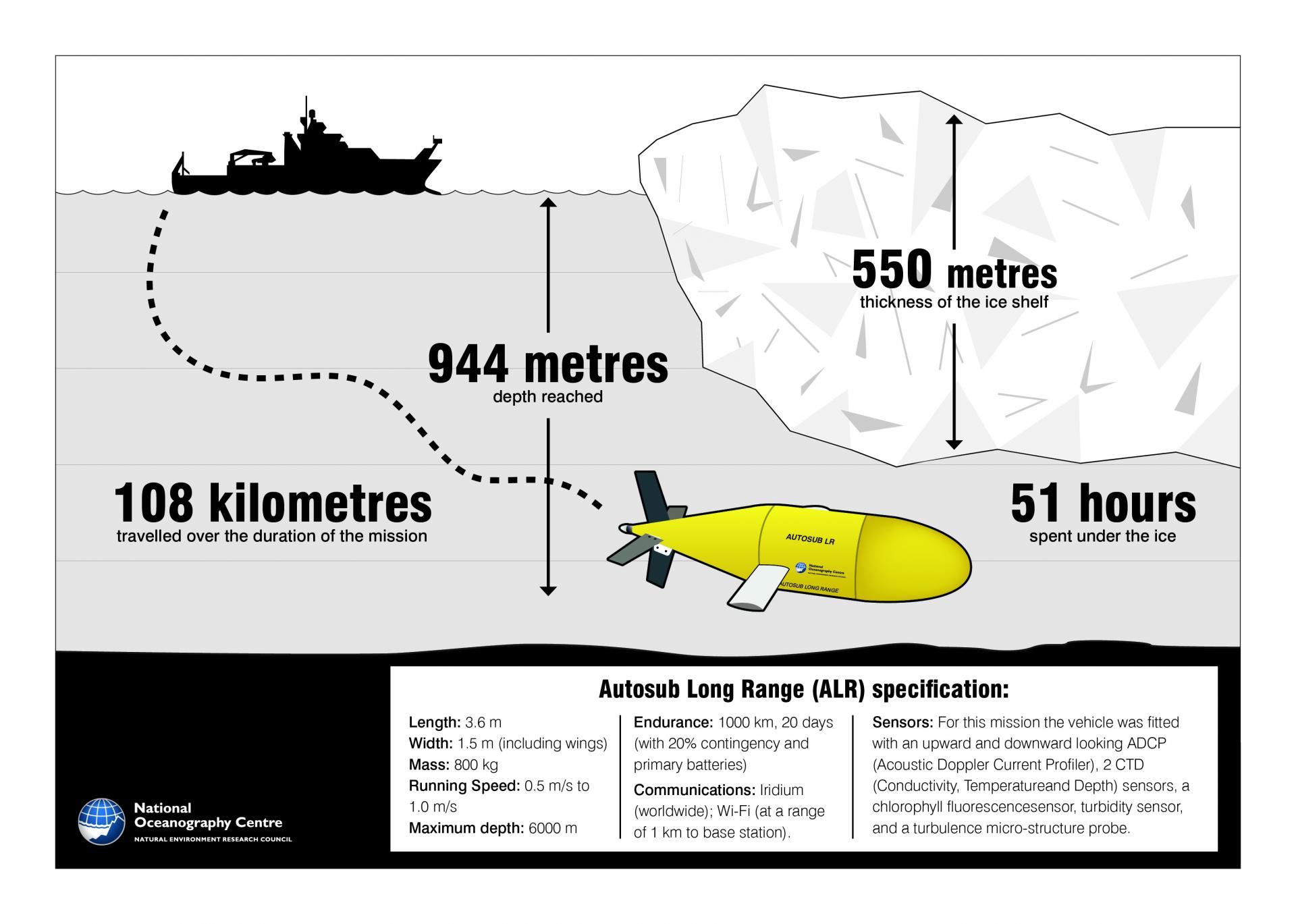