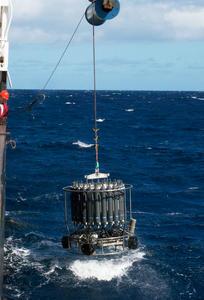 Things are off to a great, albeit busy, start. We’ve worked up a good sampling plan, and have decided that we will normally do one station per day. A station can consist of a maximum of seven sampling events, such as deployments of conductance-temperature-density (CTD) rosette frame casts, plankton nets, a turbulence profiler, an in situ stand-alone pumping system (SAPS) and a marine snow catcher.

At each station we have two CTD rosette frame casts. A CTD is a sampling device used to measure conductivity, temperature, and water depth; it is positioned on a rosette frame which also holds large open-ended containers called Niskin bottles to collect water samples at specific depths in the water column.

We have two types of CTD frames on this cruise: a stainless steel CTD for biological samples and real-time profiling that we deploy up to 500 m depth, and a titanium CTD for trace metal clean samples that gets deployed to full depth. During a cast the CTD frame is lowered to a predetermined depth and then slowly raised back towards the surface, stopping at certain depth for water collection.

On the way down, the stainless steel CTD receives real-time data on the physical properties of the seawater; with this data we can create a profile of salinity, temperature, oxygen etc. in the water column, and can close the Niskin bottles to collect water samples as the instrument is raised back to the surface.

When a CTD frame returns to the surface we take water from bottles deployed at different depths to use in our experiments. It might not sound too complicated, but each cast can take anywhere from 1–3 hours, and the water collected is shared by all the scientists on board. To ensure that each person gets what they need when they need it, we have a regimented water budget; the water budget delineates rations of the total volume of water collected at each depth for each scientist depending on their needs.

We also have a sampling order set-up so that more time sensitive samples are collected first. Plankton nets are also usually deployed at every station; it is fun and interesting to take a look at the samples under the microscope to get an idea of planktonic composition of the surface waters. Our other instrumentation is deployed less often (at every 2–3 stations), but that doesn’t mean the they are any less important! Over the next few weeks we will detail the other sampling devices we use so be sure to check back soon.

After spending a few days between Tenerife and Gran Canaria testing all of our equipment we set off southward for the Senegalese shelf. On top of the time spent in Tenerife, we had a four-day steam to the shelf and we were all pretty anxious to start sampling; so anxious in fact that we organised a four-station around the clock sampling schedule for the first 24 hours (we were sure to set up some semi-humane personnel rotations to allow breaks for eating and sleeping of course).

We arrived at our first station of 2500 m depth around midnight on Monday; both CTDs were deployed, and samples processed. We then steamed east onto the shelf for a second station at 1,000 m depth starting around 5am; sampling at this station carried on much longer because we did a full sweep of sampling using all of our instruments.

We arrived at the third station in 100 m of water in the late afternoon and deployed the two CTDs before moving on to the final station of the day. The last station was still in the shallow shelf waters, and only the titanium CTD frame was deployed. Even though the first few stations were at drastically different depths, they were geographically quite close to one another; we started our first station just off the steep continental shelf. 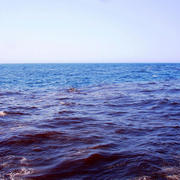 As we moved east, the seafloor rose quite quickly below us, so the difference between 2,500 m and 1,000 m was less than 10 nautical miles (imagine a slanted cliff face under water). This close proximity is what allowed us to sample four varying environments in less than 24 hours.

Then while most of us tried to catch up on sleep, we steamed westward into the open tropical Atlantic Ocean in anticipation of a ‘normal’ one-station day.

We were treated to some interesting spectacles along the way as well. Pods of dolphins and pilot whales checked out the ship in passing, and we sailed through a bloom of dinoflagellates (plankton) so dense that the sea turned red. Cool, right?

We have nearly four weeks left on the ship, and lots of science left to do. Over the next few weeks we’ll detail the rest of the equipment we use, and introduce you to the specifics of some of the work being done on board. Anxiously await our next entry where we’ll introduce you to all the scientists on board!