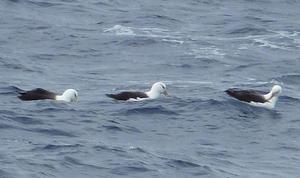 Our final site in the East Scotia Sea is an 8 km-diameter caldera on the flank of a shallow seamount at the southern end of the South Sandwich Island Arc.

The vents in the centre of the caldera are sulphur rich and are surrounded by huge numbers of clams, seven-armed sea stars, anemones, sponges and ophiuroids. The caldera rim rises 500m above the floor, effectively containing the plume emissions. 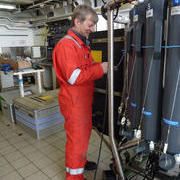 We use the conductivity-temperature-depth sensor package to measure the chemical anomalies in the water trapped in the caldera. John Wynar from the National Marine Facilities team makes sure the sensors are calibrated and that the real-time data are streamed directly to the monitors in the laboratory. These are the largest signals we have seen anywhere in the Southern Ocean, with vast particle plumes dispersed through the stagnant deep water. The water samples we collect from the plume stink of hydrogen sulfide that accumulates in the bottom water.

While we process the water samples the biology team are videoing the seafloor using SHRIMP, mapping out the distribution of life over the different vent features. We have a fair weather window between the passing lows and the ship is surrounded by seabirds, swooping and feeding on the krill in the surface waters.