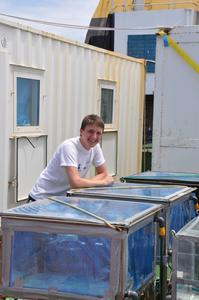 Hello, my name is David Honey and I’m a PhD student from the University of Southampton working onboard the RRS Discovery (D361). I’m in my final year of study and the results collected from this cruise are likely to feature heavily in my thesis. My work is primarily focused on nitrogen fixation rates and iron complexes known as hemes.

Despite the vast abundance of molecular nitrogen (N2) gas in the atmosphere, fixed sources of nitrogen (i.e., those accessible to living organisms) in the oceans can often be in short supply. N2 gas is not accessible to many organisms, because of the strong triple bond between the two nitrogen atoms. This can induce a limitation on biological production as nitrogen provides the fundamental building blocks of life, including DNA. The tropical North Atlantic is an area known to exhibit high levels of nitrogen fixation (transformation of N2 to fixed nitrogen) by specialised organisms and my research aims to investigate the role iron has to play in this system.

Organisms that are able to biologically fix nitrogen are known as diazotrophs and the most commonly known are from the genus Trichodesmium. It is believed that the marine diazotrophs provide a significant proportion of fixed nitrogen to the global ocean. The enzyme responsible for the nitrogen fixation reaction is nitrogenase which has a high number of iron atoms. Hemes (or haems) are iron-complexes that act as the important functional group for a wide range of iron proteins, also known as the hemoproteins. It should be noted that hemes are not directly involved in the nitrogenase enzyme. However, the abundance of hemeoproteins and the rate of nitrogen fixation could potentially highlight the allocation of iron within these nitrogen fixing organisms.

Previous research has shown that iron plays a significant role in mediating phytoplankton blooms and, therefore, potentially influences carbon sequestration to the oceans. However, it has also been argued that the availability of nitrate and/or phosphate could limit biological growth and phytoplankton biomass. In addition, it has been hypothesised that fluctuations in oceanic nitrogen concentration influence the atmospheric carbon dioxide concentration over large time scales.  Therefore, in addition to the obvious interest of climate change, it is interesting to note the significant relationship between iron (including heme complexes) and the nitrogen cycle.  It is hoped that results obtained from the cruise will provide further insight regarding the allocation of iron within diazotrophs in the region, either to the photosynthetic and respiratory apparatus (heme) or towards the process of nitrogen fixation (nitrogenase).

To measure heme abundance, seawater is filtered onto glass microfiber filters which are then frozen at −80°C. Heme is produced along the same biological pathway as the photosynthetic pigment chlorophyll, for which measurements have also been taken for comparison. To measure nitrogen fixation rates, seawater is ‘spiked’ with a specific nitrogen isotope (15N2) and then incubated for 24 hours to see how much 15N2 is incorporated into the organisms (i.e., via nitrogen fixation).

The D361 cruise is the second cruise of my PhD. The first research cruise in early 2010 (6 weeks duration between Bahamas and Tenerife) provided me with experience of what was to be expected at sea. Throughout the current cruise, I will be collecting heme and nitrogen fixation rate samples and will use the results to compare nitrogen fixation processes between the two cruise areas.

Unfortunately, I have no results yet to show you as all the samples will be analysed back in Southampton (finger crossed they will be ok!). However, I can assure you we are all working extremely hard and looking forward to a well earned celebration as we cross the equator this afternoon.

Image: David and his incubation set-up. In these tanks bottles with seawater are placed and incubated for 24 h in order to obtain nitrogen fixation rates. The tanks are cooled using constantly flowing surface ocean water, and light is controlled using a light film which reduces the ambient sunlight to the levels organisms experience at about 20 m depth in the ocean.