On multiple tidal plume fronts, mixing and sediment resuspension near the Sand Engine

The Rhine River forms one of the largest Regions of Freshwater Influence (ROFI) in Europe, discharging freshwater into a strong tidal cross flow on every ebb tide. The formation and evolution of the tidal plume fronts was captured by the STRAINS (STRAtification Impacts Near-shore Sediment) field campaign of 2014. The STRAINS field experiments were a joint collaboration between NOC and UW, in which detailed data sets were collected off the Dutch coast, at a location 10 km north of the river mouth, near the Sand Engine. Here, we use a high-resolution 3D model together with the field data to explore the interaction of the tidal plume fronts in the near to mid-field region, and their role on near shore mixing and sediment resuspension. Current velocity was measured with an ADCP with 0.25 m resolution and a frequency of 1 Hz. The data consists of temperature, salinity, and velocity measurements, as well as SPM and LISST data. In addition turbulent stresses were measured at the 12 m site using high frequency ADV velocity data collected 0.25, 0.5 and 0.75 m above the bed. We show that tidal plume fronts form on each ebb tide. As the fronts move onshore they increase turbulence, mixing, and sediment resuspension near shore. The field-data and radar images show tidal plume fronts propagating past the 12 m mooring towards the Dutch coast. Using an idealised non-hydrostatic model we show that the fronts generate high frequency internal waves as they propagate towards the coast, which break and can resuspend sediment. 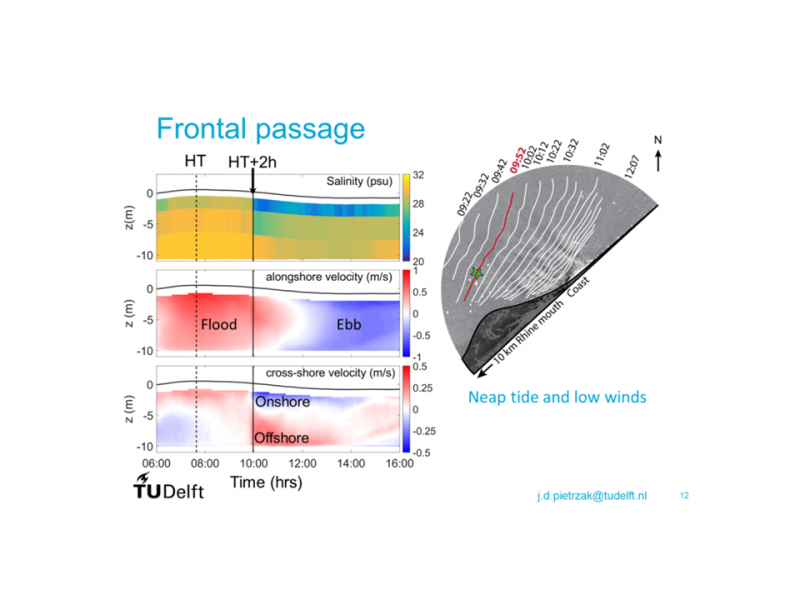