The National Oceanography Centre and our predecessor organisation, the Institute of Oceanographic Sciences Deacon Laboratory (IOSDL), have pioneered the development of marine autonomous systems, achieving a series of notable firsts along the way.

The origins of our ‘Autosub’ family of vehicles goes back to the tail end of the Cold War years, where there was a need for affordable, sustained observations in areas like the Greenland-Iceland-Faroes gap to detect the presence of Soviet submarines and obtain near-real-time oceanographic data, without having to permanently deploy oceanographic research ships.

At senior NERC level, the champion for Autosub was Prof. John Woods, and at IOSDL Dr Peter Collar and his team moved forward with development work, displaying concept drawings and models at Oceanography International from 1992 onwards – we even had an artist’s impression of Dolphin as the IOSDL Christmas card painted by Polly Williamson, the in-house artist at the time. A dummy test vehicle was built for towing trials and was tested at sea off the Dunstaffnage Marine Laboratory in Scotland.

Peter Collar retired shortly after IOSDL relocated to Southampton in 1995, and Nick Millard became team leader, with Prof. Gwyn Griffiths as Head of the Ocean Engineering division at the time. Funding always presented a challenge, and several times the programme was almost terminated, but in 1997 the NERC Thematic Research Programme ‘Autosub Science Missions’ was approved to deliver the first tranche of real-world deployments of the original Autosub-1 vehicle. Steve Hall joined Nick’s team as programme manager, and Sir Anthony Laughton chaired the Scientific Steering Committee.

A three-quarter scale mock-up had pride of place when RRS Discovery visited Lisbon for Expo ’98, the International Year of the Ocean, with most visitors not realising it was a model.

Powered by lead-acid car batteries, Autosub had short legs but quickly evolved into the Autosub 1a with several thousand D-cells batteries housed in carbon-fibre tubes providing 1000km range or up to eight days endurance – which was a considerable achievement for the time. 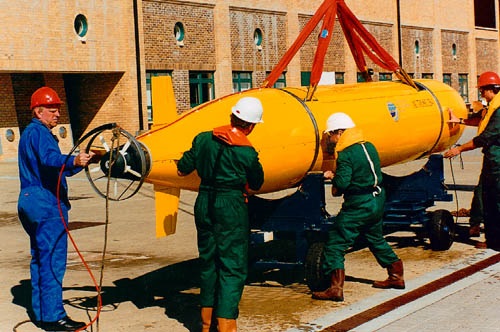 The first science missions included deployments in the North Sea, west coast of Scotland, the Isles of Scilly, Strait of Sicily and the most daring of all – the first under-ice missions. New discoveries were made with all of the missions, though we also temporarily lost Autosub in the Strait of Sicily when it found a ledge to get stuck beneath. An ROV was used to bring it back to the surface, not too worse for wear, although it lost the Florida Atlantic University sensor from the nose cone.

The three-quarter scale Autosub model was exhibited at public open days, and eventually at the Wellcome Wing of the Science Museum, and later at the National Maritime Museum in Greenwich.

A private-sector version of Autosub 1a was built by Subsea 7 under license, and was exhibited at the first London-based Oceanology International in 2002.

After Autosub Science Missions was complete the next programme was ‘Autosub Under Ice’, focused on Antarctic and Greenland ice shelf deployments. The vehicle was upgraded to Autosub 2 standard, Ken Collins succeeded Steve Hall as thematic programme manager, and Autosub began a series of highly successful missions that solidly established its reputation as a reliable under-ice performer.

Risk analysis suggested a high chance of loss under ice, and permission was given to start building Autosub3. The analyses were correct, as Autosub2 was lost some 17km from the ice edge after a mission in February 2005. Autosub3 took over the under ice work and has proved to be a solid, reliable long-term performer, and remained the NOC’s vehicle of choice for missions under ice-covered ocean until it was retired in 2017.

The need for rechargeable batteries and 6000m diving capability were met by the next member of the family, Autosub6000. Still in regular use today, this vehicle introduced lithium-ion pressure balanced battery packs, and was considerably shorter than the Autosub 1 to 3 series. It also has stubby ‘wings’, and was the first vehicle to replace the original multi-bladed propeller with a two-blade design.

Next in the family was the latest version, Autosub Long Range (ALR). Using a completely new design, this vehicle mixes design elements from autonomous gliders and the earlier Autosubs and is designed to achieve a range of 6000km as well as being able to dive to 6000m. Drag-reducing features even include a single-blade propeller, and the on board processors benefit from mobile-phone low-power technology. ALR is the first of the family not to require a specialised launch and recovery gantry, and is much more compact than the earlier vehicles. 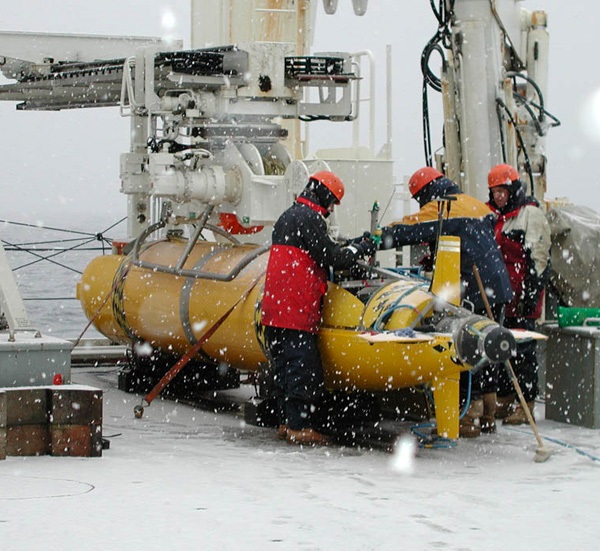 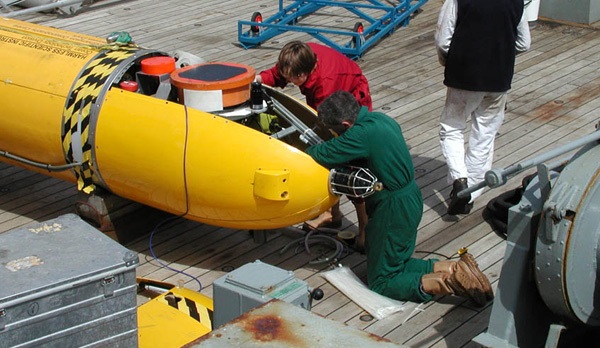 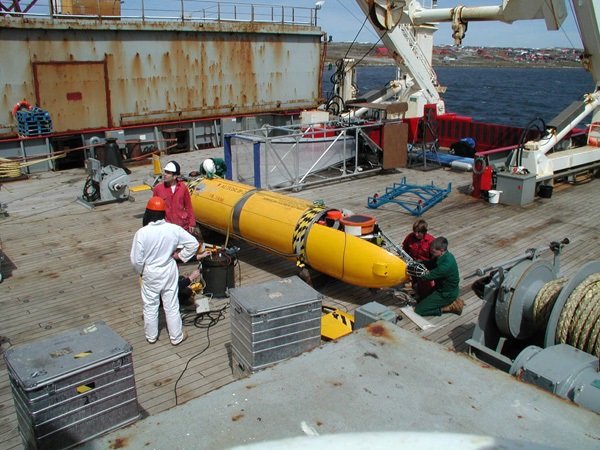